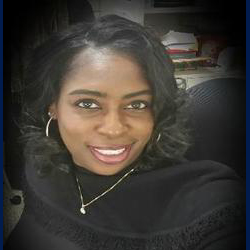 LaShan currently serves as President of the EPA William D. Barber Jr. Chapter of BIG. She hasbeen a member of the organization since the mid-1990’s and is a Life/Gold Plus member of the Chapter.   As a member of the Chapter, LaShan has held numerous positions.  However, as President, has been able to engage other EPA Chapters, across the Agency to collaborate on developing the framework for the agency forum.  As a result, and for the first time, the 2017 Agency forum was developed and hosted by five other BIG Chapters within EPA.

LaShan began her career at EPA, in the Office of General Counsel, as part of their Stay-In-School program, in August 1986. After a few years, she transitioned and became a secretary within that same office, and currently works in the Office of Resource Conservation and Recovery as a Program Analyst (IMS).

President LaShan believes that EPA’s mission to protect human health and the environment is also inclusive of supporting equality, advocacy and upward mobility for ALL EPA’s employees and the communities they serve.